How many women will try to portray themselves as Nazis? And how much skin will they show when they do so? And what about prostitution?

Women are given special privileges in the West. If a Yankee man dresses up as a Nazi, he gets pepper-sprayed and imprisoned. If a woman does it, it can be written off as a sexual fetish.

For several years after the atom bombs fell on Hiroshima and Nagasaki, Nazis were just another enemy, like Filipinos, Apaches, Mexicans, etc. But the Hollywood propaganda machine cranked into high gear years after 1945 and eventually Nazis became mythologized. People with a strong interest in sex often see Nazis as symbols of sexual fetishes.

Most literate people are aware, at least academically, that Leninists and Stalinists murdered millions of unarmed people. And yet the power of mass media mythology is such that people see Nazis as sexy murderers, torturers, and dominatrixes, whereas Communists are ignored or forgotten. Because the Nazis-as-devils mythology became prevalent while the USA was still reaching toward the stars (with the technical expertise of Wehrner von Braun), it went along with an Americans-as-angels mythology.

Does this mean that, as the USA distintegrates, increasing numbers of Yankee women will dress up as Nazis? And will they show a lot of skin when they do so? These are the weighty questions that fill my mind. 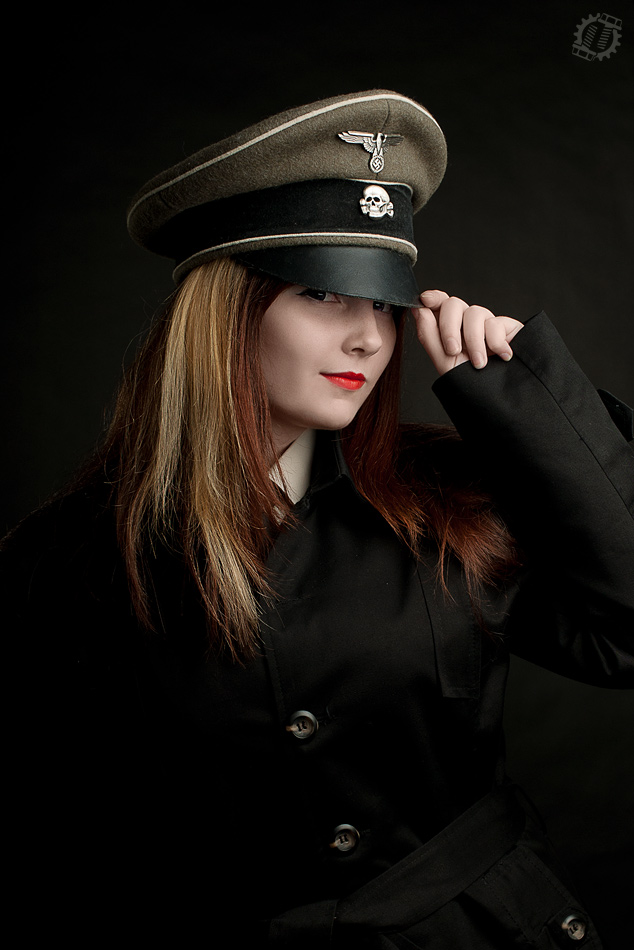 I don’t know. But I do know that people search for my blog with the term “nazi girl” and damn it, I think I ought to be able to provide more pictures of Nazi girls.

Actual neo-Nazi women are pretty hard to find. Beate Zschaepe is one possible example, but I don’t know if she self-identifies as a Nazi: 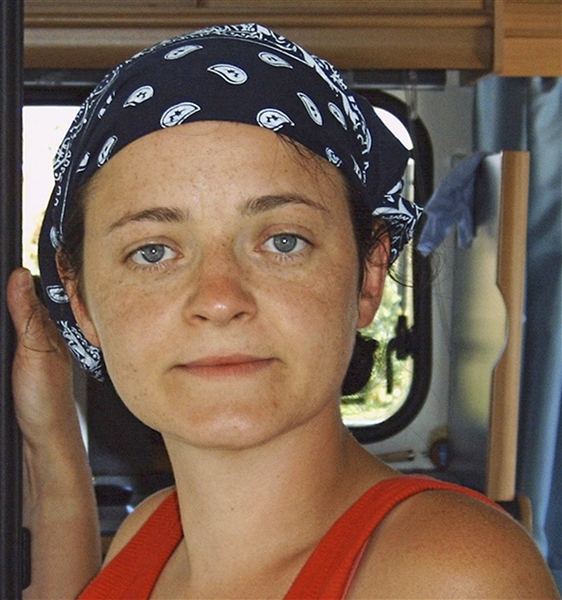 Beate Zschaepe, 38, is accused of complicity in the murder of eight ethnic Turks, a Greek and a policewoman, two bombings and 15 bank robberies. She has been described as “Germany’s most dangerous neo-Nazi.”

There are a few examples of Nazi girls on deviantart where a typical observer would say, “Yes, this girl is clearly a serious Nazi, she really believes in this stuff unselfconsciously. It is her 24/7 lifestyle to identify as a Nazi.” For these people, “Nazi” is not a mythical, larger-than-life role; it is an affiliation.

However, most of the women who like dressing up in Nazi clothes write disclaimers like the following:

It’s hard to make a difference between the style and the content of nazi-ideology. With wearing an SS-uniform on these pics I kind of cross a red line. That’s why I don’t wear it (I live in Russia!). Guess what they can do to me! I would be killed if I ever wear it

*The field cap is a fake It’s an old soviet army cap with some ss insignia I’ve found on the internet, I used PhotoShop to put them together.

[Note that “Ventrue” is a fictional vampire faction; I wonder whether her userid is an allusion to that.] 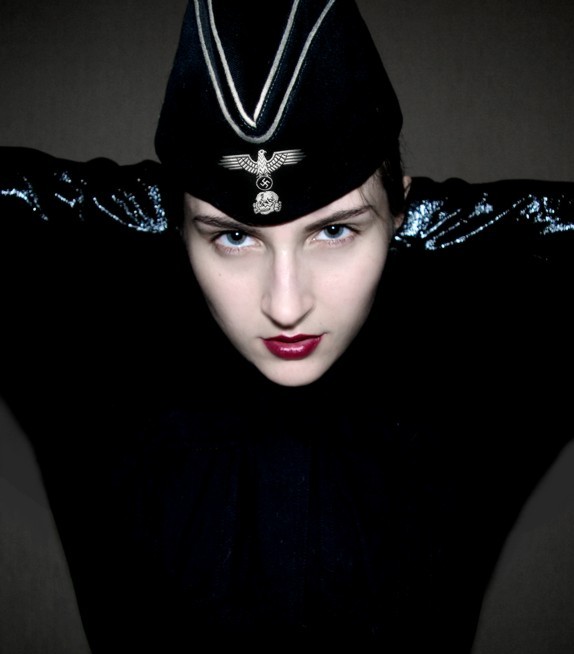 Deviant Art seems to include a lot of Nazi costume art projects, in which the model is clearly excited and engaged by imagining herself as a Nazi. These people seem to see Nazis as mythical, larger-than-life figures. For example: 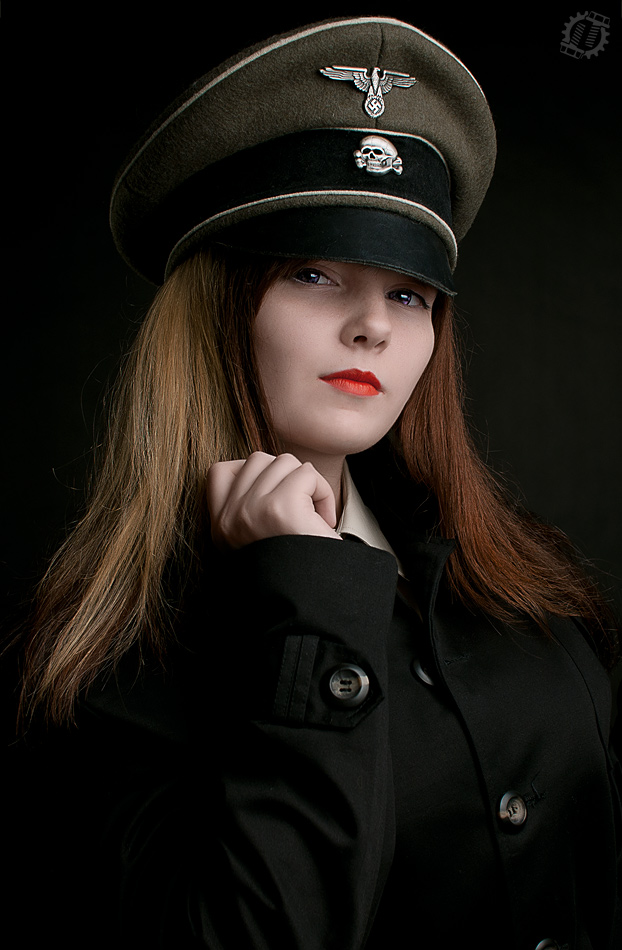 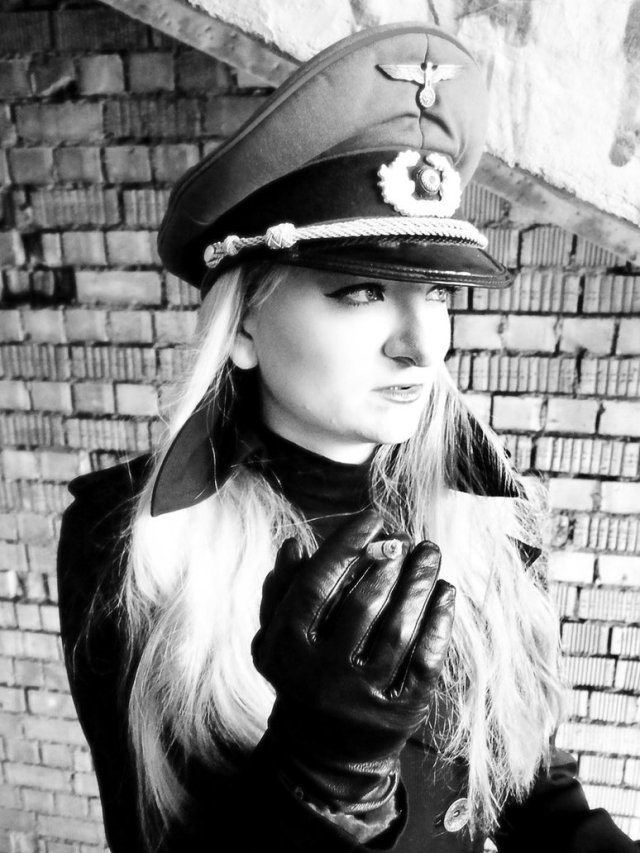 With many portraits, the artist does not seem very engaged with the myth of “Nazi as larger-than-life legend,” and merely tries to present a female subject in whatever way will provoke the most visual interest.

With some portraits, one gets the sense that the artist knows the exact degree to which sex appeal and aesthetics can grab the viewer’s attention. The following portrait seems to be aesthetically sophisticated propaganda for a political purpose. 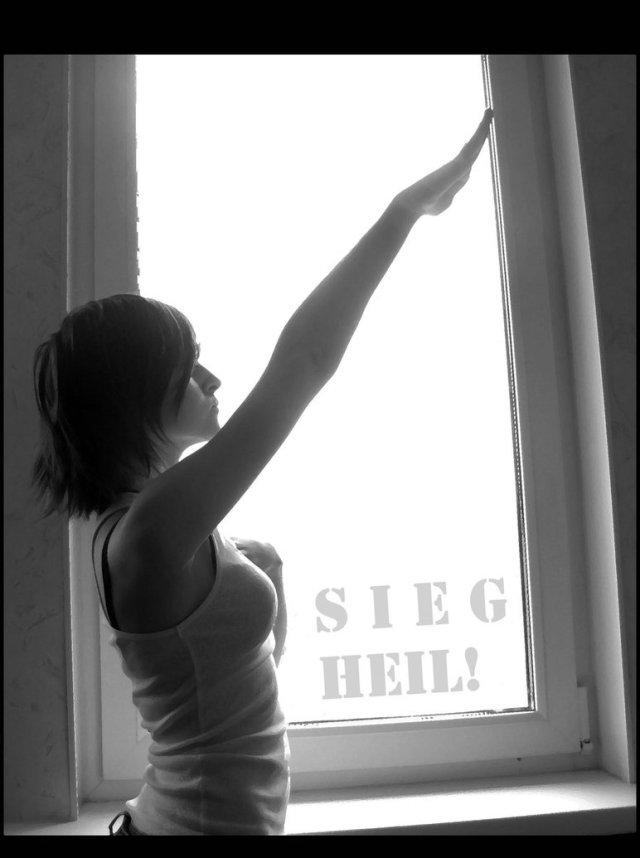 And, of course, there are some women who will always be seen as Nazis, even when their clothes don’t resemble uniforms. 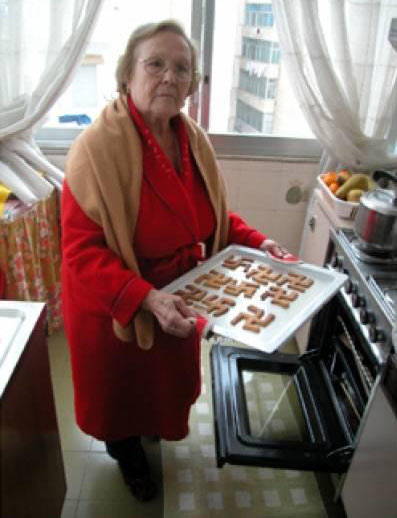 While attempting to research the Americans-as-angels mythology springing from World War II for this post, I ran into an unpleasant little fact. The Andrews Sisters, who were often regarded as wholesome, got rich, in part, by singing a plagiarized song about prostitution.

To summarize, USA soldiers, known as “GI”s, went to various countries, including the Republic of Trinidad and Tobago. One local balladeer, with the improbable name of “Lord Invader,” wrote a song about brothels in which “both the mother and the daughter” enjoyed “working for the Yankee dollar” because the Yankees offered them higher prices than the locals offered.

A middleman plagiarized this song and repackaged it for the Andrews Sisters, who somehow were able to get away with singing about the joys of two generations of women volunteering to be prostitutes. I am just priggish and prudish enough to want to moralize about this, but since both Augustine and Aquinas were convinced that prostitution will never be abolished so long as humans are incarnate, I will summarize with an image that summarizes my grand, eloquent, grandiloquent philosophy:

And – with a hat tip to Martel, I will conclude with some ostentatiously wholesome music:

This entry was posted in aesthetics and tagged nazi girl. Bookmark the permalink.