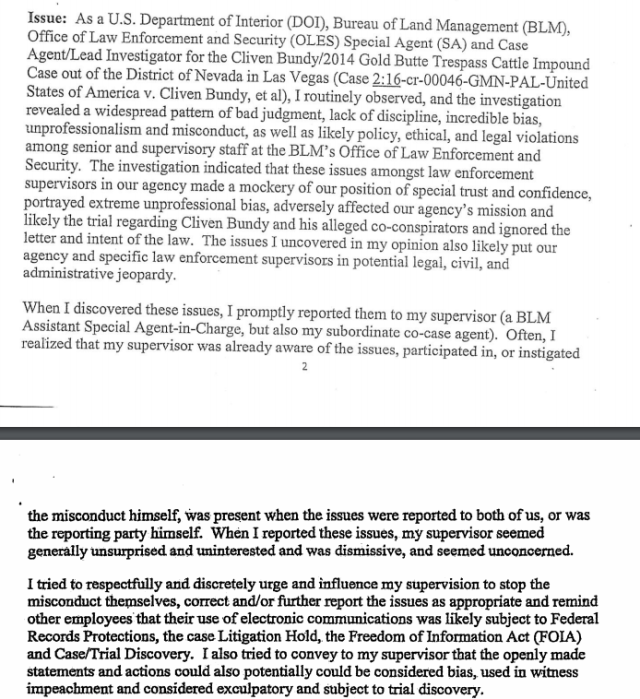 Three days ago, I saw this document posted on the conspiracy subreddit. At the time I didn’t quite understand its significance. However, a judge has apparently used it to declare a mistrial for the Bundy/Finicum massacre.

“The indictment and grand jury testimony is full of lies. Truth has been blocked in previous trials.

Listen closely – we will try to get you the truth. The truth will set me free and I’m counting on you to help me see that.”

As AZCentral.com reports, Navarro cited five key pieces of information that prosecutors did not disclose: records about surveillance and snipers at the Bundy Ranch; unredacted FBI logs about activity at the ranch in the days around the standoff; threat assessments about the Bundys dating to 2012; and internal affairs reports about the BLM.

Navarro methodically laid out her reasoning for about an hour, citing legal standards and case law, before delivering her ruling.

She said the evidence that was withheld could have been favorable to the accusedand could have affected the outcome of the case.

Navarro stopped short of dismissing charges against the four men. It is unclear whether the case will be retried because Navarro did not rule whether the mistrial was with or without prejudice.

Navarro suspended the trial two weeks ago and warned of a potential mistrial after prosecutors for the first time disclosed several documents that appeared to support defense claims about the government’s use of video surveillance and sniper teams during the standoff.

Prosecutors have long maintained the FBI was not involved in the standoff and that no video surveillance or sniper teams were used. They charged defendants with making false claims about snipers and videos to incite militia in the runup to the standoff.

She has set another hearing for January and has tentatively scheduled a new trial to begin Feb. 26.