Collapsnik hopes that 2018 will see a black swan

The status quo is like a bad case of gangrene. It will be fatal eventually, but meanwhile it causes a lot of suffering, and thus collapsniks look forward to the merciful release of death.  If you idolize the free market as a substitute for whatever God you failed to find, then you can theorize that after collapse, the market economy will descend from Heaven and judge the quick and the dead.

Example:
Crises always take longer to arrive than you think, and then happen much quicker than they ought to.
– Rudiger Dornbusch 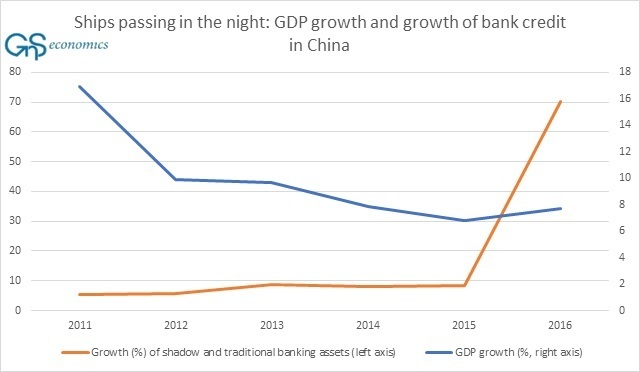 An eerie calm has taken over the world markets. Volatility is crashing, and economic and political shocks come and go without any noticeable effect on the asset markets. Inflation and interest rates are also low. So ‘Goldilocks’ is here, right?
Well, no. I have written a collection of dark pieces about the world economy this year. They have followed the tone set in our business cycle forecasts. In March, we took a deep dive behind the façade of the economic expansion to discover the sources of growth. We found them to be unstable, depending on political decisions and thus prone to crash.
In our latest forecast, we envisaged how the world economy would respond if the foundations of global growth would break. It was not pretty. Here I present the main takeaways.
In the end, there was absurdity

I consider the Figure 1 …to give the most compelling picture on the absurdity we have arrived to. It presents the yield of the US 10 year treasury bond, the yield of Italian 10 year bond and yields of junk bonds of European and US companies as well as the QE:s of the ECB and the Fed. It implies that the default probability of an average European junk-rated company is smaller than that of the US government. This, naturally, is just absurd and it only tells the tale of a massive central bank induced market distortion. The pricing of risk in the normal sense does not exist in the capital markets anymore.

FIGURE 1. THE YIELDS OF SOVEREIGN BONDS IN THE US AND ITALY, THE AVERAGE YIELD OF HIGH-YIELD (JUNK) BONDS IN EUROPE AND IN THE US AND ACTIVE MONTHS OF THE QE PROGRAMS OF THE ECB AND THE FED. SOURCE: FED ST. LOUIS AND GNS ECONOMICS
Central banks are currently planning to withdraw their support. What happens, when the tide turns?
Crash and the receding liquidity
In reality, QE has been all about pushing the central bank induced, artificial liquidity into riskier financial products. This has pushed the risks of the financial assets to the far ends of the probability distribution, thus making them invisible.
The problem is that when the tide of the artificial liquidity recedes, it may well take the ‘zombified’ global economy with it. We envisaged how this would play out.
When the panic starts, the high-yield debt markets are likely to fall first, followed by the corporate bonds and the weakest sovereign bonds. This means that, suddenly, the interest rates of many financial products will skyrocket, leading to further panic in the asset markets, as banks, investors and institutional investors and funds try to cover their long (and short volatility) positions. This leads to a further asset selling and balance sheet deterioration as all asset classes start to lose their value. A vicious re-enforcing cycle of deleveraging and asset deflation will commence. The weaker banks, especially in Europe, will see their balance sheets deteriorating to insolvency. The interbank and bank lending rates will jump, and bank runs will ensue once the regular depositor understand the nature of the collapse. The corporate bonds markets and some weaker sovereign bond markets will freeze, leading to further raises in the interest rates. Corporate and household sentiment collapses. Investments will stop. Prices of the residential property and commodities are also likely to see large price decreases. The heavily indebted households and zombie companies will default and declare bankruptcies. The wealth funds, non-bank financial entities and pension and social security funds will see the value of their assets dwindling, and holes will start to appear in the financial fabric of modern societies.
So, when the turn in the markets occurs (for whatever reason), the tide of liquidity will recede laying bare the risk it had flushed to oblivion. Pricing of risk will return to the market forces, and all hell will break loose.
Spotting the Black Swan (among all the white ones)
To get things started, one needs a ‘trigger’. Catastrophic economic events tend to start with a Minsky moment, that is, a sudden jump of the distribution of the asset yields into the negative side. I (we) tend to think that the shock will originate from China.
Several institutions have warned about the economic headwinds faced by China, but many of them still think that China is able to master its debt problem. However, the actual problem for the world economy is not the debt of China per se, but its growing debt-inefficiency.
Figure 2 presents the combined assets of traditional and shadow banking sector and the growth of GDP in China. It carries but one message. The ability of China to grow its economy by accumulating debt is diminishing rapidly.

FIGURE 2. GROWTH OF THE SIZE OF BALANCE SHEETS OF TRADITIONAL AND SHADOW BANKING SECTORS VS. THE CURRENT GDP GROWTH. SOURCE: GNS ECONOMICS, BIS, PBOC
Thus, China may face a hard-landing whether Beijing wants it or not. Because China has, for example, been responsible for all of the private credit growth since 2008 (Figure 3), this will have serious repercussions for the world economy.

FIGURE 3. NON-FINANCIAL DEBT OF THE PRIVATE SECTOR IN 44 MAJOR COUNTRIES. IN BILLION US DOLLARS. SOURCES: GNS ECONOMICS, BIS.
The end is nigh?
I (we) think that China is the key for the global economy, and that the turn for the worse could be much closer than many think. With the effectiveness of debt stimulus at a deep decline, and debt levels at steep rise, China is facing a choice between two stark options: to allow for a recession now or a much worse crisis later. I (we) are keen to bet for the former. More so, as president Xi would probably like to have a booming economy during the 100th year celebration of China’s communist party in 2021.
When China starts to remove its debt-stimulus (or it becomes ineffective), it will take away a key support for global growth. Global macroeconomics indicators will start to tumble followed by dwindling corporate profits. The overbought asset markets with diminishing central bank support is likely to catch the drift quickly (the high-yield market is my ‘favorite’ for the actual inflection point).
With the global central banks and China planning to tighten, 2018 looks a lot like a year, when the market economy finally returns. For the artificially propped asset markets, it means a crash.

This entry was posted in political economy. Bookmark the permalink.