Bad Religion was always edgy. It’s amusing that they don’t address the true edge of acceptable discourse – anti-Jewish thought. They flirt with the alt-Right – which welcomes Jews and most of which appears to be led by Jews.

If you need to review the scandal, it is described at:

Here is Bad Religion, missing the point but probably due to sheer stupidity rather than clever propagandizing:

Is David Hogg the same guy as Adam Lanza? Is this misleading photography? Are they brothers? 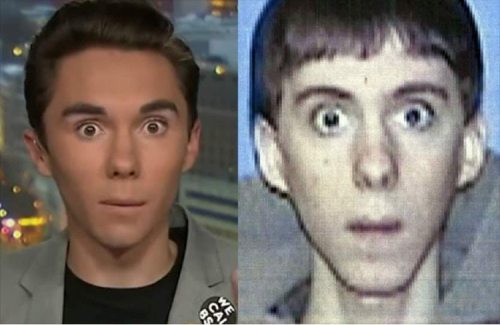 Why is Israel so mean to Gaza?

8ch reports:
The media is setting up false flag pedophiles to intentionally conflate White nationalism with support for pedophilia, weaving it into their “incel” narrative.

>NATHAN Larson is an outspoken supporter of child abuse who worships Adolf Hitler as a hero.

>He’s also on a mission to run for congress.

>While the father of one has never been found guilty of paedophilia, archived versions of his campaign website, which appears to have been disabled, revealed his support for both child sexual abuse and male dominance over women.

>He openly admitted to being a paedophile after HuffPost reporters asked whether he was one, or whether he simply wrote about the topic.

>“It’s a mix of both,” he said. “When people go over the top there’s a grain of truth to what they say.”

>Mr Larson, an accountant who has also written about father-daughter incest and the repeated rape of his ex-wife, said he was a supporter of free speech.

>“A lot of people are tired of political correctness and being constrained by it,” he told the publication.

>Mr Larson also freely admitted his main supporters were “incels” — men who describe themselves as being “involuntary celibate” and who hate women as a result.

See how they are incorporating the pedophilia narrative into the “incel” narrative:

>In a phone call, Larson confirmed that he created the now-defunct websites suiped.org and incelocalypse.today — chat rooms that served as gathering places for pedophiles and violence-minded misogynists like himself. HuffPost contacted Larson after confirming that his campaign website shared an IP address with these forums, among others. His sites were terminated by their domain host on [29 May 2018].

Military bases might finally get used for nonmilitary purposes (as many have suggested for years):

From White Punks On Dope to White Eels on Coke:

NXIVM leaders Keith Raniere and “Smallville” actress Allison Mack were arrested in Mexico and stand trial for human trafficking, child sex trafficking, and other crimes. Raniere is being held without bail while Mack is in the custody of her parents with an ankle bracelet. Bronfman, who oversaw the group’s experiments on women and children at their secretive “Rainbow Cultural Center,” is expected to be charged.

Charles Hurt reported that in the spring of 2007, “executives and top associates…along with their family members” of NXIVM donated $29,900 to the Hillary Clinton 2008 presidential campaign.

Kirsten Gillibrand has also taken money from the group’s high-profile socialite member Bronfman, and her father actually worked for the cult.

A study released on Monday by the Brazilian government spelled out the high cost of crime in the South American giant, placing a few of the country’s states on par with some of the world’s most murderous nations, including Honduras. In financial terms:

The report from Brazil’s presidency noted the overall economic cost of crime between 1996 and 2015 jumped an equivalent of 4.4 percent of gross domestic product annually — about three times that of some European countries.

In a document still effervescent with fear and spanning some fifty pages of lucid, densely packed prose peppered with biblical scripture, this tortured forty-one-year-old rubber-lover—who’d been arrested for various rubber-related crimes, the most minor of these being his making thousands of indecent phone calls to department store saleswomen, inquiring about rubber bikinis for his imaginary wife while fondling laminated advertisements of elastic-clad models with one hand and himself in the other—worked feverishly to understand the origins of his own insatiable desire for rubber and flesh.

Episode 48 of the Zman: “What it means to be ‘dissident right’ according to the Zman”

You can just skip ahead to 52:00 to get a list of the folks Zman thinks are important.

It was Graham’s depiction of violent times that make his letter an important historical document. He describes Aboriginal cannibalism – though there is no other evidence of this – but adds “in nearly three cases out of five” the aggression was on the part of the invaders.

On Saturday night, California Congresswoman Maxine Waters encouraged the type of recent protests against President Trump as seen in several Washington, DC and Virginia area restaurants, saying that she has “no sympathy” for those who serve in the administration and that the public should “turn on them” and “absolutely harass” White House officials while they are doing normal every day activities.

White House press secretary Sarah Huckabee Sanders was asked to leave a restaurant in Virginia Friday night by the business owner because of her connection to President Donald Trump, Sanders acknowledged Saturday on Twitter.