8ch published an odd photograph that might be a hoax, or might be real. It is as follows: 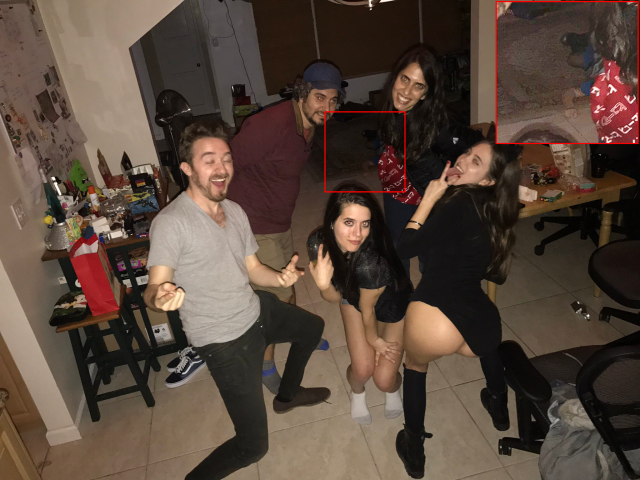 I have no reason to believe that the photograph depicts a real scene. It might be a movie scene; it might have been altered with Photoshop or the like. I will speculate in this post on the presumption that it might be real.

One channer made an unsupported claim regarding the persons in the picture.

That channer claimed that the pictured persons included:

Alex Hirsch (Friend of Roiland, he was at the party too)

One might speculate that the persons in this picture have been recruited by a blackmailer. Presumably the blackmailer would persuade them that they are sophisticated criminals rather than pathetic pawns in a larger scheme. Thus the blackmailer would persuade them to have a party with intoxicating beverages and cunnilingus in the presence of a dead body. The blackmailer would encourage them to partially conceal the dead body. The partial visibility of the dead body would be an important signal for people in the blackmail operation. On the one hand, the adults in the picture cannot be unambiguously accused; on the other hand, they are clearly involved in illicit activities and thus can be dealt with as equals by similar criminals.

Perhaps the blackmailer persuaded them to kill a child. Perhaps some high-ranking cult member did the killing and the people in the picture are just low-level flunkies in the cult. Perhaps the child is not even dead.

With the information presented in this post, one can only speculate. There is no guarantee that more complete information will be available any time soon.

An archive of the chan thread is at: