Evil is evil, and edgelord is edgelord, but seldom the twain shall meet

I suppose it is possible to be both evil and edgy, but I tend to think that edginess consumes a lot of resources and causes a lot of interference with everything. Thus the most evil people probably avoid being edgy; being edgy probably reduces the effectiveness of evil.

That being said, some edgy images are too bulky to be considered edgy memes. Example:

Recently Q has written:
6 Dec 2018 – 4:27:27 AM
The ‘blue checkmark’ FAKE NEWS Twitter personalities are out in full-force today attempting to push another FALSE narrative that arrests were supposed to occur today.
Controlled Narrative?
#FactsMatter
How much attention does “Q” receive from the FAKE NEWS MEDIA?
Why are they working so hard to try and discredit something they label as a “FAKE CONSPIRACY.”
People awake are what they FEAR THE MOST.
LOSS OF CONTROL
THE GREAT AWAKENING.
WWG1WGA!!!
Q

6 Dec 2018 – 6:50:16 AM
https://www.foxnews.com/politics/obamas-fbi-brass-hollowed-out-after-latest-resignation-of-key-official📁
It’s all just a CONSPIRACY.
Nothing To See Here.
Nothing is happening.
RUSSIA RUSSIA RUSSIA
Q

6 Dec 2018 – 7:00:21 AM
RUSSIA = THE REAL CONSPIRACY.
Define ‘PROJECTION’.
What happens when they lose control and the TRUTH is exposed?
What happens when PEOPLE no longer believe or listen to the FAKE NEWS CONTROLLED MEDIA, CONTROLLED HOLLYWOOD, CONTROLLED BLUE CHECKMARK TWIT SHILLS, ETC ETC???
THE GREAT AWAKENING.
SHEEP NO MORE.
WE, THE PEOPLE.
FOR GOD & COUNTRY – WE FIGHT!
Q

Yesterday it was reported that a long email chain was uncovered that provides evidence that former FBI Head James Comey and others in his inner circle signed and sent a FISA warrant application to the FISA Court and that they knew the FISA warrant was fraudulent.
Since the emails are labeled classified by the Deep State DOJ and FBI, Comey wanted to have his testimony in front of Congress this week in the open so he wouldn’t have to discuss his criminal actions like this one.

Yesterday, John Solomon from the Hill reported that a long email chain was uncovered that the Republican House members added to the list of documents they would like President Trump to un-classify and release to the American public.

The Mueller probe appears to be taking an interesting turn by targeting several high-profile Washington insiders, who have close ties to the Democrat Party.

On Wednesday, sources close to the matter claimed Department of Justice prosecutors are renewing efforts to investigate the Podesta Group, Mercury Public Affairs, and Obama-era White House counsel Gregory Craig. They say federal investigators began interviewing potential witnesses and setting up closed-door meetings in recent weeks to get to the bottom of their apparent failure to register as foreign agents.

The American Legion passed Resolution 40 calling “upon the United States Congress to publicly, impartially, and thoroughly investigate the attack on the USS Liberty and its aftermath.”

It should be noted that to date, 51 YEARS since the incident, there has been NO formal investigation WHATSOEVER of the incident.

Several survivors of the USS Liberty attack have stated that they believe Israel knowingly attacked the warship in a bid to blame it on Egypt and drag the US into a conflict for Israel’s benefit.

Former FBI director James Comey will be deposed Friday in a closed-door session by the House Judiciary and House Oversight Committees as part of their joint investigation into decisions the Department of Justice made in 2016. Comey had filed suit to quash the congressional subpoena, but following an ominous hearing before a federal judge last week, Comey agreed to appear Friday morning. The House in turn assured Comey that he could discuss the hearing upon its conclusion and that a transcript would be issued within 24 hours.

Hopefully the lack of a live audience will allow the congressmen to focus on fact-finding and not grandstanding.

Flynn is expected to tell his story soon:
https://quodverum.com/2018/12/340/mueller-s-capitulation-general-flynn-s-ambush-the-tide-has-turned.html 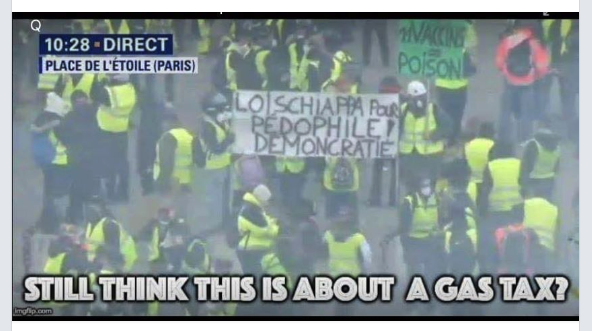 American prosecutors in the sex cult racketeering case of NXIVM founder Keith Raniere claim Canadian co-defendant Clare Bronfman, the Seagram’s heiress, has been paying the legal fees of their fellow defendants and even witnesses, and allegedly advising them to keep silent. This is a “potential conflict of interest” that is “compounded” by the fact that Bronfman is not just a benefactor, but also a defendant, United States attorney Richard P. Donoghue claims.

As I have continued to try to peel the onion that is the layered life of Felix Sater, I discovered an excellent article by Newsweek reporter Bill Powell, Donald Trump Associate Felix Sater Is Linked to the Mob and the CIA—What’s His Role in the Russia Investigation?. One of the surprising revelations from Powell, especially in light of recent events, is that Felix Sater was a childhood friend of Michael Cohen, Trump’s lawyer. Let that sink in for a moment. The FBI informant, Felix Sater, was a long time friend of Cohen. This now provides another explanation for how Michael Cohen became to be a part of the Trump orbit. Felix Sater appears to have brokered the introduction (Sater and his company, Bayrock, started working with Trump in 2003 while Cohen did not start working for Trump until 2006).

The most important take away from the Powell piece is that it gives us some critical pieces of evidence for evaluating the Steele Dossier and exposing that document as a fraud.

In 2011, Europeans rose up over ACTA, the misleadingly named “Anti-Counterfeiting Trade Agreement,” which created broad surveillance and censorship regimes for the internet. They were successful in large part thanks to the Polish activists who thronged the streets to reject the plan, which had been hatched and exported by the US Trade Representative.

Now, Europe is in on the verge of an ever farther-reaching scheme to censor and surveil the internet: the new Copyright Directive, which limits who can link to (and criticise) the news and sets up crowdsourced databases of blacklisted content that anyone can add anything to, and which cannot thereafter be published online.

The Poles aren’t having any of it: a broad coalition of Poles from the left and the right have come together to oppose the new Directive, dubbing it “ACTA2,” which should give you an idea of how they feel about the matter.

French authorities will deploy at least 8,000 riot police and gendarmes in Paris on Saturday, and 89,000 forces across the country according to the Prime Minister, as the Elysee prepares for “act four” of the Yellow Vest movement’s violent protests against the Macron government.

For years a fleet of leftist NGO ships worked around the clock to deliver “refugees” to Italy. A number of the organizations sponsoring ships in the armada are funded in part by organizations run by billionaire George Soros.

Occupy Jamie Dimon: Activists Are Chasing the Billionaire Across the U.S.

JPMorgan’s CEO is dogged by protesters on stages and flagpoles.

Jamie Dimon was on stage at a community college in Ohio in November, telling students not to get scared by the snakes and alligators they’ll see in life.

A few feet away, an activist named Ruth Breech reminded herself to stay calm: “I need to be ready.” When JPMorgan Chase & Co.’s leader paused a moment and looked to his left, Breech, at 5-foot-2, was standing beside his chair. “It’s so good to see you again,” she said. She and another protester raised a banner: “Chase: Stop profiting off dirty energy.” Dimon adjusted his tie.

Dimon had just become the only remaining Wall Street boss who led a global bank before the financial crisis. JPMorgan is so big and profitable, and the billionaire has won so much influence, that he’s being followed around the U.S. by a growing crew of critics who want the bank to join their fights against climate change, human-rights abuses, and private prisons. They’ve tried to get his attention by scaling Park Avenue flagpoles, blocking Seattle traffic with tepees, bursting into conferences, and blasting audio of crying children outside his apartment.

Italian authorities said Tuesday they had dismantled the rebuilt upper echelons of the Sicilian Mafia by arresting 46 people including the presumed new regional boss who took over after the death of the “boss of bosses” Salvatore “Toto” Riina.

1 Response to Evil is evil, and edgelord is edgelord, but seldom the twain shall meet