Q posted a link to:

Child sex trafficking investigators from the FBI’s New York field office have conducted an interview with a victim who provided chilling details about allegedly being raped by Bill Clinton on a yacht in New England when the victim was a young boy.

“We are treating him as a victim,” an FBI official told True Pundit in New York City prior the interview with FBI.

Top FBI officials arranged the interview with the victim, who said he was raped by Bill Clinton when he was just eight years old. The interview was conducted by the FBI’s task force that was established to investigate sexual assault and sex trafficking claims linked to Jeffrey Epstein and his associates. That task force, also attached to the NYPD, remains active even though Epstein reportedly committed suicide in federal custody just weeks ago.

“We still have a job to do here and that’s what we’re doing,” one FBI official told this reporter.

The interview and the allegations against Clinton are both detailed and disturbing. We have decided to publish the video of the victim’s account in his own words which contain explosive details of the alleged assault and much more. Again, his account is graphic. Nonetheless, both I and the federal agents with knowledge of the case believe the victim is credible.

To the FBI’s credit, the Bureau handled the victim with respect and dignity during the interview. I personally escorted the victim to FBI Headquarters in Manhattan. Even though I have been a massive critic of the FBI, I was impressed with the way they treated the victim who is now in his mid-twenties. Credit the FBI here for listening and investigating.

But the road to this point was not without intrigue and tragedy.

The site was run by 42-year old Brian Way, according to police, and sold and distributed images of child exploitation to people across the world.

Inspector Joanna Beaven-Desjardins, head of Toronto’s Sex Crimes Unit, said they enlisted the help of the United States Postal Inspection Service since many of the videos were being exported to the U.S. and began a joint investigation.

After a seven-month long investigation, officers executed search warrants across the city of Toronto including at the business, located in the city’s West End.

Investigators catalogued hundreds of thousands of images and videos of “horrific sexual acts against very young children, some of the worst they have ever viewed,” Inspector Beaven-Desjardins said at the press conference.

Police seized over 45 terabytes of data from the $4-million business that distributed to over 50 counties including Australia, Spain, Mexico, Sweden and Greece.

As a result of the investigation thus far, 50 people were arrested in Ontario, 58 in the rest of Canada, 76 in the United States, and 164 internationally.

What was most alarming, Inspector Beaven-Desjardins said, was that many of the arrests were of people who worked with or closely interacted with children.

Citing a particularly egregious example, she said police found over 350,000 images and over 9,000 videos of child sexual abuse in the home of a retired Canadian school teacher. Some of the images were of children known to the man and he was also charged with sexually abusing a child relative.

The inspector said an indispensable aspect to the success of the operation and the rescue of 386 children from child exploitation was the expansive cooperation between Toronto police and organizations worldwide.

“[This] confirms that when we work together regardless of the borders that divide us we can successfully take down those who not only prey on our most vulnerable but also profit from it,” she said.

Police said the children were “rescued from child exploitation” but did not give more details.

Planned Parenthood did not contest the accuracy of Daleiden’s undercover video reports. They sued him for trespass and other alleged illegal methods he and his colleagues used to conduct the investigation. 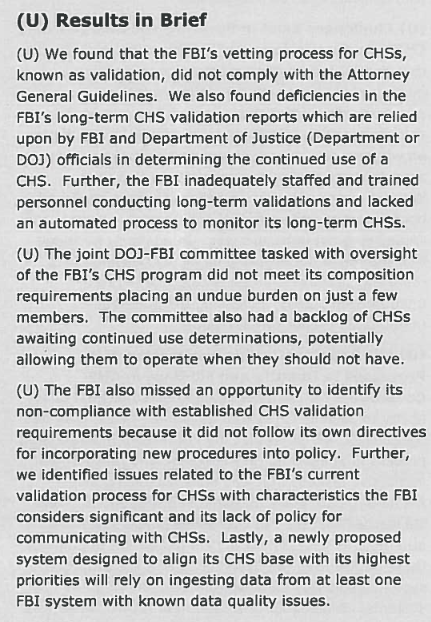 The IG investigated the FBI (This is not the phone-book-sized IG report that Horowitz will drop in two weeks and discuss circa 5 Dec 2019). The IG dropped a version of a report redacted for public release.

5.
Here is a film. It has a thin veneer of satire but it is mostly political.

What does it mean to be “against Shem and his descendants”? Definitely Not Safe For Work. Maybe Not Safe For Life.

Note that the proposed etymology of “cannibal” in this film does not match the definition commonly found. The common etymology derives “cannibal” from “Carib” as mispronounced by Christopher Columbus circa 1500, as follows:

Carib, American Indian people who inhabited the Lesser Antilles and parts of the neighbouring South American coast at the time of the Spanish conquest. Their name was given to the Caribbean Sea, and its Arawakan equivalent is the origin of the English word cannibal.

NSFW video with different idea of “cannibal” as coming from “Canaan” and “Baal.”

Let’s give some time to a rebuttal:

The key refrain is “I’m not white, I’m Jewish.”

A fellow named “Netanyahu” – not the prime minister, apparently his son – asked a question: “Why are so many powerful globalist politicians linked to pedophilia?”

Swedish authorities have discontinued an investigation into a rape allegation against the WikiLeaks founder, Julian Assange, after a review of the evidence.

The deputy chief prosecutor, Eva-Marie Persson, said the complainant’s evidence was deemed credible and reliable, but that after nearly a decade, witnesses’ memories had faded.

11.
Unproven speculation is rife. A Twitter user SPECULATES that the State Department was using Ukraine as a center for money laundering. Possible, but not yet PROVEN.