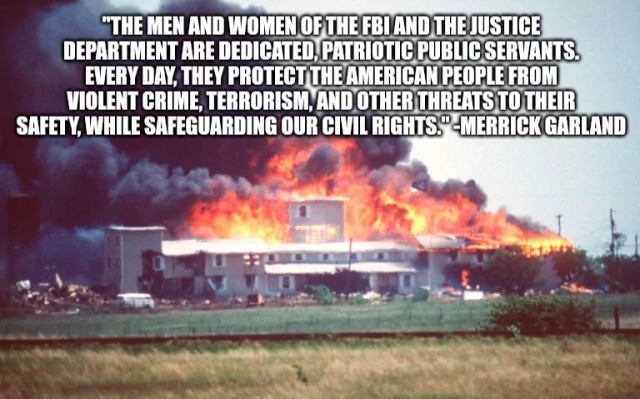 Sorry for the paucity of memes in this post. The news items are too important.

It looks like imgur does not embed properly, and catbox is having technical difficulties, so this post will not have many video embeds. The above link should show a video of a person — allegedly an FBI agent — conducting a search in a highly unprofessional manner.

We have multiple links on government misconduct that warrant your attention.

President Trump declassified a binder on January 19th, 2021 that contains hundreds of pages about the Crossfire Hurricane scandal. It contains damaging information about the corrupt actors involved with our government. Two different DOJ Attorney General’s have defied President Trump’s direct lawful order to publish the binder in the Federal Register. It’s been 19 months as the DOJ defies the order, and every FOIA request to make it public.

DOJ had already made redactions to protect sources & methods, and returned the binder back to the White House. But the corrupt FBI also wanted to hide names. So at the last minute, the DOJ demanded the binder comply with the 1974 Privacy Act. The Act requires any “agency” that releases records to also hide personal or identifiable name information. The DOJ knew this Act doesn’t apply to the White House, it was a stall tactic. The courts decided this 22 years ago that the Privacy Act was based around FOIA requests, and the White House is not an agency.

Hours before Trump left office on January 20th, Chief of Staff Mark Meadows gave the binder back to the DOJ, along with this memo. He asked the DOJ to make any Privacy Act redactions “out of an abundance of caution”. In the memo he asks they expeditiously release the binder when finished. Meadows foolishly expected this would take 3-4 days. It’s been 19 months and still not released. Just the News recently obtained the Meadows memo from the National Archives, who also denied having a copy of the declassified binder.

Meadows admits in interviews various agency’s often stalled or defied Trump’s orders. Meadows knew better than to rely on the DOJ to release this damaging binder after they left the White House. He should have released the binder to the public himself. But in doing so, there was a chance he would become a target of the DOJ and FBI. The memorandum below is what Mr. Meadows sent to the DOJ Attorney General on January 20th, 2021.

Now this–
New details on Monday’s raid of Mar-a-Lago may offer an explanation on what the FBI was looking for and why the FBI has not released the Spygate documents as they were ordered to when President Trump left office.

Sperry had his first Twitter account removed after he identified Eric Ciaramella as the leaker in the first Trump impeachment trial.

Sperry had his second account takedn down on Monday after he tweeted about the Mar-a-Lago raid and what the FBI was looking for.

According to Paul Sperry, the FBI agenst spent 9 hours looking for details President Trump took with him on the Crossfire Hurricane FBI spying scandal.

The FBI and DOJ cannot let the American public know the truth of the their criminal acts and attempted coup of President Trump. So they raided his home looking for the documents that may indict the organization.

Sources say the FBI agents and officials who were involved in the raid on former President Trump’s home work in the same CounterIntelligence Division of the FBI that investigated Trump in the Russiagate hoax and are actively under criminal investigation by Special Counsel John Durham for potentially abusing their power investigating Trump in the Russian fraud and therefore have a potential conflict of interest and should have been RECUSED from participating in this supposed “espionage” investigation at Mar-a-Lago.

Feds Who Raided Mar-a-Lago Are Under Investigation by John Durham . . . for Russiagate Hoax

Two months before his Florida home was raided by the FBI, former President Donald Trump secretly received a grand jury subpoena for classified documents belonging to the National Archives, and voluntarily cooperated by turning over responsive evidence, surrendering security surveillance footage and allowing federal agents and a senior Justice Department lawyer to tour his private storage locker, according to a half dozen people familiar with the incident.

Trump Adviser Breaks the ‘Bad News’ to the FBI: The ‘Classified Docs’ in Their Possession Were Already Declassified

. The same judge who signed the warrant on trump was on the RICO case with DJT and hillary. Bruce Reinhart recused From that case June 22, 2022. Two months later he signs the warrant to raid trump. Now we all read the warrant and the language in it said they could basically take anything they wanted to be related to trump, his businesses, and any ‘secret docs’. Then to make it spicy in the warrant Bruce Reinhart instructs the FBI, or the officers on duty during the seizure, to return the receipt and inventory of the seizure to the DUTY MAGISTRATE, who is Bruce Reinhart. The same man who was working for the defendants of the RICO case who is Hillary and the rest of the DS. Now to make it extra spicy, when you check his background and as anons have pointed out before he switched from prosecuting Epstein to defending his employees.

“During his time as a federal prosecutor, Reinhart worked on the case against now-deceased Jeffrey Epstein, a convicted sex offender.”

“But, he switched sides in the middle of the case, quitting the US Attorney’s office and going on to defend several of Epstein’s employees. He later faced a lawsuit from several of Epstein’s accusers, accusing him of sharing information with Epstein’s legal team during the switch, The New York Post reported. He denied the allegations.”

Now the connection and theory ive crafted from this info is, That Once the FBI and Bruce Reinhart go through the documents, some that may even be evidence against Hillary in the Current RICO, That Reinhart is going to hop back on the case for Hillary and try some shenanigans. If you take a look into it Hillary’s team keeps filling motions to dismiss based on random and stupid shit. just dig into it, note judge names.

Might be something to look for in the future or might just be nothing. I mean, what’s stopping him from doing it, hes done it before.

also note how they tried to get a judge on the case who was appointed by Bill Clinton.

An armed man who tried to breach an FBI field office was killed in a standoff with police.

A law enforcement standoff with a man who attempted to breach the FBI’s field office in Cincinnati on Thursday has ended with the suspect dead, according to the Ohio State Highway Patrol.

Lt. Nathan Dennis said that after negotiations failed, law enforcement officers tried to take the suspect into custody, but the suspect raised a gun at authorities and was fatally shot.

The man was identified as Ricky Walter Shiffer, according to three federal law enforcement sources.

The FBI is investigating Shiffer’s social media presence and whether he had ties to right-wing extremism, one of the sources said.

Click on the photo or headline for details and to watch the video.