So the FBI and the Biden Crime Family are interlinked. That much is obvious.

But simply stating the obvious truth is not enough. We have to dig down into the details. Who knew what, and when did they know it?

So you think the #BalenciagaGate story is a one-off?

This still is from Kylie Jenner’s promo for her “make-up” line. pic.twitter.com/i3m9JR3Ghm

Below the fold, we present several dozen stories that are more or less relevant to the Biden Crime Family.

The quartet made their allegations as part of an open letter denigrating The Post’s reporting as Russian misinformation which was signed by dozens of other longtime intelligence hands.

“Our experience makes us deeply suspicious that the Russian government played a significant role in this case,” the letter read. “If we are right, this is Russia trying to influence how Americans vote in this election, and we believe strongly that Americans need to be aware of this.”

Of the four, only Clapper has ever publicly addressed the letter, offering a vigorous defense to The Post in March.

[quote]
We pretty much all knew that there was collusion in suppression of information on the various information meat markets, but now Musk has released internal Twitter correspondence that confirms. Taibi has a mass of Twitter documents and will release them serially on Twitter with Musk’s blessing. Taibi is hardly a conservative.

Now, the 1st Amendment like all of the Bill of Rights limits the actions of the governments, both federal and state. It does not limit the actions of private officials or corporations UNLESS the private entity acts at the bidding of a government.

Well, pilgrims the FBI was pressing Twitter to act against the “Laptop from Hell” while Trump was still president. IMO this means that the FBI was acting in a mutinous rebellion against the president who is in fact their superior in the Executive Branch of the federal government.

Similar sentiment from a different source: 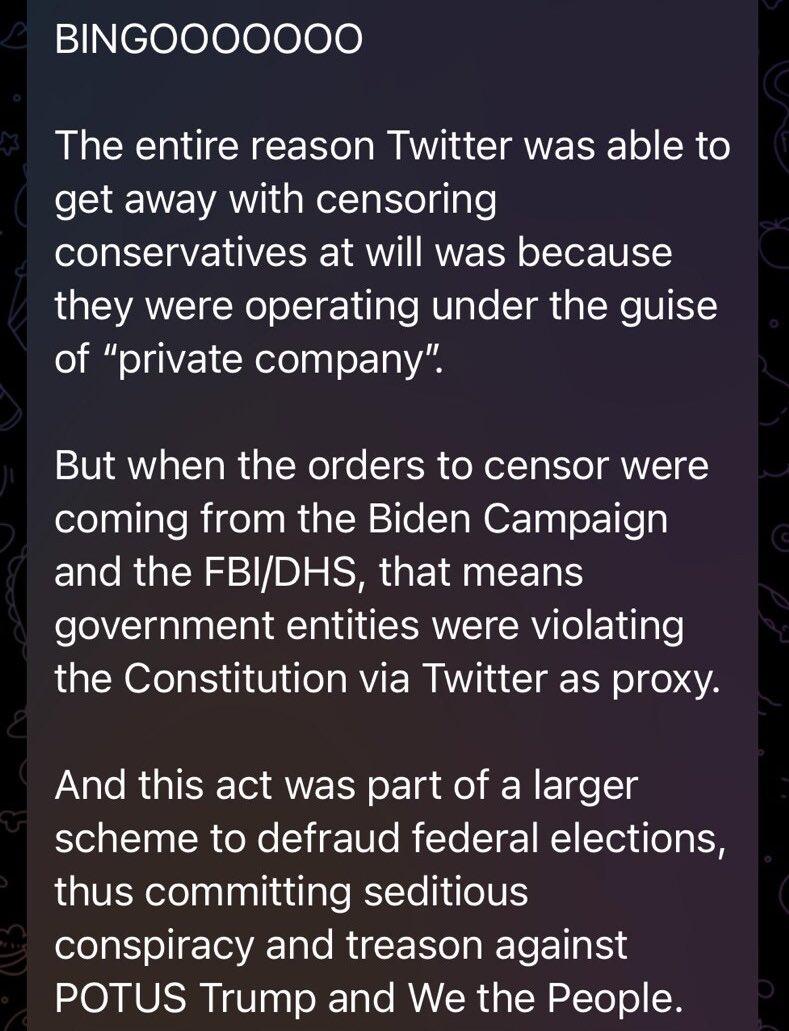 The revolving door between government and private business is a major driver of Deep State Swamp corruption.

Baker has been featured repeatedly in the Russian investigations launched by the Justice Department, including the hoax involving the Russian Alfa Bank. When Clinton campaign lawyer Michael Sussmann wanted to plant the bizarre false claim of a secret communications channel between the Trump campaign and the Kremlin, Baker was his go-to, speed-dial contact. (Baker would later testify at Sussmann’s trial). Baker’s name also appeared prominently in controversies related to the other Russian-related FBI allegations against Trump. He was effectively forced out due to his role and reportedly found himself under criminal investigation. He became a defender of the Russian investigations despite findings of biased and even criminal conduct. He was also a frequent target of Donald Trump on social media, including Twitter. Baker responded with public criticism of Trump for his “false narratives.”

After leaving the FBI, Twitter seemed eager to hire Baker as deputy general counsel. Ironically, Baker soon became involved in another alleged back channel with a presidential campaign. This time it was Twitter that maintained the non-public channels with the Biden campaign (and later the White House). Baker soon weighed in with the same signature bias that characterized the Russian investigations.

Weeks before the 2020 presidential election, the New York Post ran an explosive story about a laptop abandoned by Hunter Biden that contained emails and records detailing a multimillion dollar influence peddling operation by the Biden family. Not only was Joe Biden’s son Hunter and brother James involved in deals with an array of dubious foreign figures, but Joe Biden was referenced as the possible recipient of funds from these deals.

The Bidens had long been accused of influence peddling, nepotism, and other forms of corruption. Moreover, the campaign was not denying that the laptop was Hunter Biden’s and key emails could be confirmed from the other parties involved. However, at the request of the “Biden team” and Democratic operatives, Twitter moved to block the story. It even suspended those who tried to share the allegations with others, including the White House press secretary Kayleigh McEnany, who was suspended for linking to the scandal.

Even inside Twitter, the move raised serious concerns over the company serving as a censor for the Biden campaign. Global Comms Brandon Borrman who asked if  the company could “truthfully claim that this is part of the policy” for barring posts and suspending users.

Baker quickly jumped in to support the censorship and said that “it’s reasonable for us to assume that they may have been [hacked] and that caution is warranted.”

Keep in mind that there was never any evidence that this material was hacked. Moreover, there was no evidence of Russian involvement in the laptop. Indeed, U.S. intelligence quickly rejected the Russian disinformation claim.

However, Baker insisted that there was a “reasonable” assumption that Russians were behind another major scandal. Faced with a major scandal implicating a Joe Biden in the corrupt selling of access to foreign figures (including some with foreign intelligence associations), Baker’s natural default was to kill the story and stop others from sharing the allegations.

The released documents may show why Twitter was so eager to hire Baker despite his role in the Russian collusion controversies. What likely would have been a liability for most companies seemed an actual draw for Twitter. For censors and political operatives in Twitter, Baker likely seemed like a “made man” for a company committed to systemic censorship. He would be working with the chief legal officer at the company, Vijaya Gadde, who functioned as the company’s chief censor.  Gadde was widely reviled by free speech advocates for her dismissal of free speech principles and open political bias.

Not unexpectedly, Gadde and Baker would play prominent roles in the suppression of the Hunter Biden scandal. There was hardly a need to round up “the usual suspects” in the suppression scandal when Musk took over the company. Both lawyers swatted down internal misgivings to bury a story that could well have made the difference in the close 2020 election.

It is striking how many of the figures and institutions involved in Russian collusion claims are within six degrees of James Baker. Not only did Baker work closely with fired FBI director James Comey and other key figures at the Justice Department, but he was an acquaintance of key Clinton figures like Sussmann who pushed the false collusion allegations. He was also hired by Brookings Institution, which also has a curious Bacon-like role in the origins and development of the false Russian collusion allegations.

None of these means that Baker was the driving force of the scandals. To the contrary, Baker earned his bones in Washington as a facilitator, a reliable ally when it came to the business of the Beltway.

read the whole thing at:

Elon Musk Increases Personal Security Over Concerns About His Safety

Rod Dreher appears to be an evil tool of the Deep State Swamp posing as a Christian:

This is a very important concession. Despite claims that Twitter’s censorship of the Hunter Biden story came solely at the behest of the Biden campaign staff and the Democratic National Committee, Roth’s testimony highly suggests that the U.S. security state apparatus was deeply implicated in Twitter’s decision to remove the story.

New York Post columnist and author of “The Laptop from Hell” Miranda Devine also notes there is a suspect lack of documentation of the FBI’s role in the Hunter Biden laptop story’s suppression.

How to Save Your Skin, According to Bankman-Fried and Fauci

Sen. Rand Paul On Fauci: “We’ve Caught Him Red Handed, He Won’t Get Away” 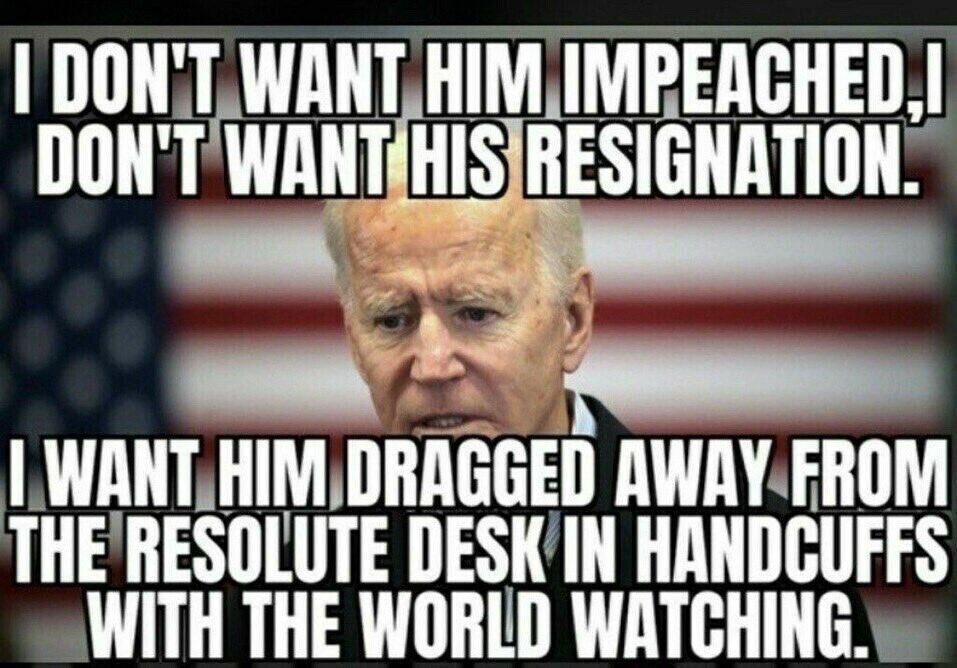 In case you missed it:

PROOF: Crooked Secretary of State Katie Hobbs Had Twitter Silence Her Critics in Arizona – Prior to Gubernatorial Run – Data From MO vs. Biden

Ukraine is relevant to the Biden Crime Family because it serves as a money laundering node:

RUSSIA IS WINNING THE BIG WAR TOO BY HELMHOLTZ SMITH

The Ukrainians ARe In Real Trouble in Bakhmut

As of November 29, 2022, Sam Bankman-Fried, the disgraced CEO of FTX and Alameda Research, is still scheduled to speak with business journalist Andrew Ross Sorkin at the annual New York Times Dealbook Summit. This shouldn’t be too surprising. Bankman-Fried, like many fraudsters before him, used the money he stole to buy political influence. And now it seems this money was well spent.

Over the next several months many will try to figure out how precisely Bankman-Fried fooled so many. Some will investigate conspiratorial explanations focussed on his political connections and connections to Ukraine. There may well be very fishy reasons for how Bankman-Fried succeeded in rapidly accumulating so much wealth and power.

Luke Ford has a long podcast that mentions Kanye.

MILO Bails On #Ye24 After Turning On Nick Fuentes

A writer at Unz.com has opinions on Ye as “holy fool”:

2 Responses to Thank you, Captain Obvious!