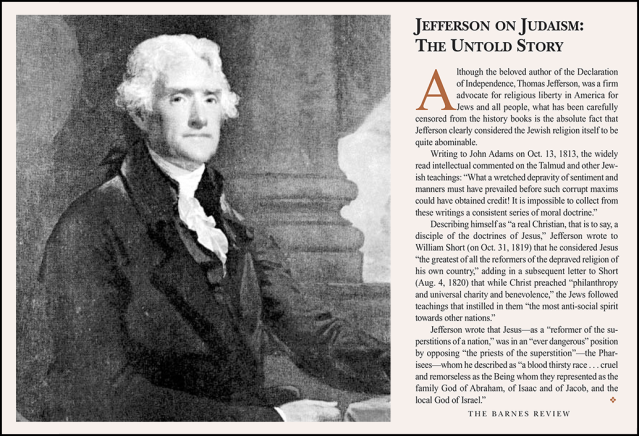 Quote:
Although the beloved author of the Declaration
of Independence, Thomas Jefferson, was a firm
advocate for religious liberty in America for
Jews and all people, what has been carefully
censored from the history books is the absolute fact that
Jefferson clearly considered the Jewish religion itself to be
quite abominable.
Writing to John Adams on Oct. 13, 1813, the widely
read intellectual commented on the Talmud and other Jewish
teachings: “What a wretched depravity of sentiment and
manners must have prevailed before such corrupt maxims
could have obtained credit! It is impossible to collect from
these writings a consistent series of moral doctrine.”
Describing himself as “a real Christian, that is to say, a
disciple of the doctrines of Jesus,” Jefferson wrote to
William Short (on Oct. 31, 1819) that he considered Jesus
“the greatest of all the reformers of the depraved religion of
his own country,” adding in a subsequent letter to Short
(Aug. 4, 1820) that while Christ preached “philanthropy
and universal charity and benevolence,” the Jews followed
teachings that instilled in them “the most anti-social spirit
towards other nations.”
Jefferson wrote that Jesus—as a “reformer of the superstitions
of a nation,” was in an “ever dangerous” position
by opposing “the priests of the superstition”—the Pharisees—whom
he described as “a blood thirsty race . . . cruel
and remorseless as the Being whom they represented as the
family God of Abraham, of Isaac and of Jacob, and the
local God of Israel.”

the general spread of the light of science has already laid open to every view. the palpable truth, that the mass of mankind has not been born with saddles on their backs, nor a favored few booted and spurred, ready to ride them legitimately, by the grace of god.

273 years ago, one of America’s most visionary founding fathers – Thomas Jefferson – was born. To celebrate his birthday, we are sharing a small sample of some of his most prophetic quotes which are perhaps more relevant today than they have ever been in the history of the United States.

Rightful liberty is unobstructed action according to our will, within the limits drawn around us by the equal rights of others. I do not add ‘within the limits of the law’; because law is often but the tyrant’s will, and always so when it violates the right of an individual.

On banks as the biggest threat to liberty – Thomas Jefferson letter to John Taylor, May 28, 1816

If the American People ever allow the banks to control the issuance of their currency, first by inflation and then by deflation, the banks and corporations that will grow up around them will deprive the people of all property until their children wake up homeless on the continent their fathers occupied. The issuing power of money should be taken from the bankers and restored to Congress and the people to whom it belongs. I sincerely believe the banking institutions having the issuing power of money are more dangerous to liberty than standing armies.

On the dominion of banks – Thomas Jefferson letter to James Monroe, January 1, 1815

The dominion which the banking institutions have obtained over the minds of our citizens…must be broken, or it will break us.

This institution (Bank of the U.S.) is one of the most deadly hostility existing against the principles and form of our Constitution… an institution like this, penetrating by its branches every part of the Union, acting by command and in phalanx, may, in a  critical moment, upset the government.”

The monopoly of a single bank is certainly an evil.

On printing money – Thomas Jefferson letter to John Taylor, May 28, 1816

The principle of spending money to be paid by posterity, under the name of funding, is but swindling futurity on a large scale.

On the threat of banks – Thomas Jefferson letter to John Taylor, May 28, 1816

The system of banks which we have both equally and ever reprobated, I contemplate as a blot in all our (state) constitutions, which, if not corrected, will end in their destruction.”

My wish was to see both Houses of Congress cleansed of all persons interested in the bank or public stocks; and that a pure legislature being given us, I should always be ready to acquiesce under their deliberations, even if contrary to my own opinions; for I subscribe to the principle, that the will of the majority, honestly expressed, should give law.”

The bank mania is one of the most threatening of these imitations. It is raising on a monied aristocracy in our country which has already set the government at defiance, and although forced at length to yield a little on this first essay of their strength, their principles are unyielded and unyielding.

On the threat from moneyed corporations – Thomas Jefferson letter to George Logan, November 12, 1816.

I hope we shall take warning from the example andcrush in its birth the aristocracy of our monied corporations, which dare already to challenge our government to a trial of strength and bid defiance to the laws of our country.”

The trifling economy of paper, as a cheaper medium, or its convenience for transmission, weighs nothing in opposition to the advantages of the precious metals… it is liable to be abused, has been, is, and forever will be abused, in every country in which it  is permitted.

And, a just as critical recpirocal letter by John Adams to Thomas Jefferson, August 25, 1787

All the perplexities, confusion and distress in America arise, not from defects in their Constitution or Confederation, not from want of honor or virtue, so much as from the downright ignorance of the nature of coin, credit and circulation. ”

On the need for a “little rebellion now and then” – Thomas Jefferson to James Madison, Paris, January 30, 1787

I hold it that a little rebellion now and then is a good thing, and as necessary in the political world as storms in the physical. Unsuccesful rebellions indeed generally establish the incroachments on the rights of the people which have produced them. An observation of this truth should render honest republican governors so mild in their punishment of rebellions, as not to discourage them too much. It is a medecine necessary for the sound health of government.

And while it may not be his birthday, here are two  bonus quote from James Madison, from June 28, 1787:

A standing military force, with an overgrown Executive will not long be safe companions to liberty. The means of defence agst. foreign danger, have been always the instruments of tyranny at home. Among the Romans it was a standing maxim to excite a war, whenever a revolt was apprehended. Throughout all Europe, the armies kept up under the pretext of defending, have enslaved the people.

And on the encroaching power of unchecked government – June 7, 1788

Since the general civilization of mankind, I believe there are more instances of the abridgment of the freedom of the people by gradual and silent encroachments of those in power, than by violent and sudden usurpations.