Women: Arakawa Under the Bridge will destroy your chances of ever staying married for long 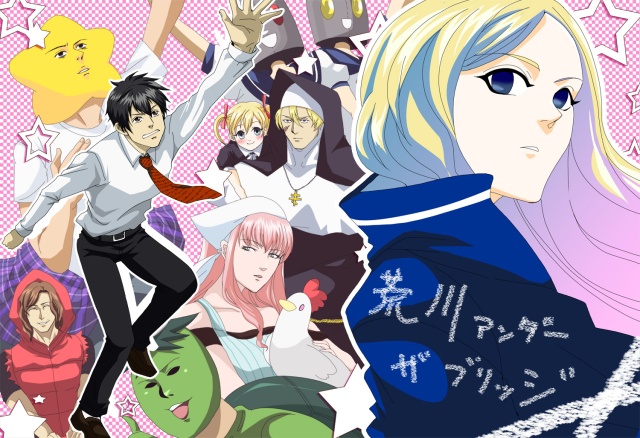 If the fantasy takes the form of “Follow your mystical instincts and use your alien-gifted invisible power ring to form constructs of solid light, then sit back and allow the solid-light-constructs to battle giant robots,” then it probably won’t cause any observable drama in your life. If you take it too seriously, you will slip into catatonic psychosis and starve to death; if you haven’t starved to death, it hasn’t warped your behavior too badly.

If, on the other hand, the fantasy takes the form of, “Follow your feminine instincts to marry the perfect man,” you will probably create a lot of painful drama in your own life, and in the lives of everyone around you.

The old world of patriarchal marriage was built on many cultural habits, but an important one was as follows: Men would have few sexual opportunities, and thus men would be very grateful for any romantic attention received from high-class (i.e. non-prostitute) women. Sex from a non-prostitute woman obligated a man to take care of that woman for the rest of her life.

The real-world situation of modern feminist women in Western and pseudo-Westernized countries is as follows:

1 – Women become vaguely aware of sex before they have completed puberty.

2 – Women gain the legal right to have sex with whomever they choose at some legally set age, dependent on jurisdiction. Many jurisdictions believe that female teenagers are old enough to fornicate but not old enough to vote or drink alcohol!

3 – Most women fornicate with more than one voluntarily chosen partner. This is known in the manosphere as “riding the cock carousel,” and such women are known as “carousel riders.” Such women frequently go out of their way to avoid marriage or long-term commitment to any of their various sex partners.

4 – Eventually – sometimes around age 27, often much later – women decide that they want one responsible, middle-class man to give them all the social dignities of married life, plus a commodious home, children, etc. These women demand that a male of their choice must commit to them by means of marriage. Many desirable men refuse to commit at this stage. Many women are surprised that men do not feel gratitude and loyalty for the sex they have received.

5 – Some carousel-riders fail to marry at all; others marry briefly and then divorce. Many are frustrated to find that they cannot have children because they have waited too long.

Attention, women: if you want to have a failed marriage, or no marriage at all, then Arakawa Under the Bridge is almost as good a textbook as Sex and the City.

The plot of Arakawa Under the Bridge is as follows.

The male lead, Riku, is a rich, intelligent young man whom any number of girls would love to marry. He has just one problem: he is inherently unable to tolerate being in debt to anyone. Thus if he believes that he owes any kind of debt, he pays it back in full as quickly as possible.

The female lead, Nino, is a beautiful blonde woman with a completely mysterious past, slightly animalistic instincts, and a spaced-out demeanor. She is amusing herself by swimming as nimbly as a killer whale and catching raw fish in her teeth when the male lead falls into the water and almost dies. She saves him, and thus he owes her the greatest debt possible and asks to repay her.

She asks him to repay her by loving her. Of course, he might have fallen in love with her anyway, but now his innate sense of duty kicks in, and loving her becomes his highest duty in life. Then for the rest of the show, she can be an irrational space-cadet while her fanatically-devoted husband candidate follows her around like a puppy dog, eager to please her, getting almost zero attention, much less affection. It’s not that she holds him in contempt; she has no idea how to love anyone. She can live mindlessly, like a killer whale, while the rest of the universe must move heaven and earth to accommodate her. And the other characters contemplate this and realize it is because both Riku and Nino are incredibly inexperienced virgins with no notion of how to get started in romance.

What the show presents is a modern woman who simply follows her animalistic instincts, and manages to get fanatical commitment from an ideal husband-candidate. That might have been possible in medieval Europe; a lucky maid might have kissed a hyper-Christian lord and his Christian sense of guilt over sex might have caused him to marry her immediately. But even then – such a marriage would have been a real marriage, including cohabitation, sex, and lifelong commitment. Nino gets Riko as a devoted slave, and she doesn’t have to act like a wife toward him in any way. Her unwifeliness* is not due to her lack of love to give – it is because she is an ultra-innocent (and thus ultra-desirable) virgin!

Let us take a step back and review five problems of real women in modern societies.

1 – They have (at the very least) a rough idea of how to get started in romance; frequently they have dysfunctional expectations of romance. Even if they are not entirely dysfunctional, they lack the innocence that would have been expected of them in a truly patriarchal culture.

2 – They are accustomed to using society’s laws to back up their personal sexual lifestyle choices. Society has dismantled any advantages that patriarchy once gave to men, and thus most men are quietly resentful.

3 – Most typical modern women have sexual experience with several men. This by itself is enough to blunt the sort of emotional bonding that might have happened accidentally in the old days, when sex was rare and personal desires were often repressed.

4 – Because patriarchal marriage got mortally wounded in the 1860s and was obviously dead by 1970, real men have little, if any, gratitude for sex. Certainly no-strings-attached pre-marital sex does not make a man feel that he is obligated to marry his sex partner if and when she feels a need for marriage.

5 – By following their instincts and the dysfunctional lessons of popular culture, many women destroy all their chances for long-lasting marriages. Economically speaking, this is not a big personal loss, because many of them have better educations and higher-paying jobs than their potential male mates. Further, the relentless march of old age prevents many career-minded people from ever conceiving children.

Now, let’s look at Nino provides a perfect fantasy to anesthetize women from these problems:

2 – Nino’s reliance on Riku’s honor means she can ignore laws.

3 – Nino is ultra-virginal and no one can object to her past. (However, in one episode of the second season, she mentions that she fears criticism about her past. I don’t know if the female author was venting her true feelings through her wish-fulfillment heroine, or whether the author was trying to make the heroine more similar to her female audience.)

4 – Riku feels fanatically obligated to love Nino. He doesn’t just feel obligated to marry her – he feels that he needs to give her whatever emotional thrills love can give.

5 – Nino will never have to admit that she’s screwed up her chances. Nino will never be too old to have babies. She won any meaningful conflicts in the first episode. Everything after that is just light romantic comedy. If the author ever feels like it, she can have her heroine marry her rich, devoted hero. (But why would she want to disrupt the world’s greatest endless courtship fantasy?)

Arakawa Under the Bridge will not be remembered for being the most popular television show to anesthetize “carousel riders” – that dishonor will go to Sex and the City. Arakawa Under the Bridge will not be remembered as a carefully-planned work of high art – the author made it all up on the fly, and she shows no sign of being willing to wrap up the plot to any kind of conclusion. Unfortunately, this is a story that might mislead a few “carousel riders” who otherwise might have had acceptable marriages. This is not necessarily a huge tragedy, because the men they would have married have probably destroyed their lives with similarly unrealistic fiction. After the modern Western civilizations crash and burn, we can let the survivors figure out what sort of fiction will instill appropriate morals. You and I will probably be dead by then, Gentle Reader.

* Is “unwifeliness” recognized as a word in English? If not, it ought to be.

1 Response to Women: Arakawa Under the Bridge will destroy your chances of ever staying married for long